The largest specialist personal injury and employment firm in Scotland 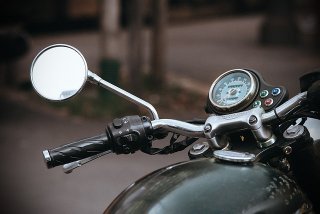 Despite the media campaigns advising motorists to ‘Think Bike, Think Biker', road accidents involving motorcycles are still far too common. In fact, in 2014, there were 339 motorcyclists who were killed in the UK. There were also 5,289 accidents where the cyclists were seriously injured – a significant increase from the previous year.

As motorbikes are much smaller and narrower than most other vehicles occupying the roads, they can be very hard to spot. Previous statistics have shown that many accidents are caused when a car driver has failed to properly look for motorcyclists before manoeuvring. The name that these types of accidents have become known as is SMIDSY ("Sorry mate, I didn't see you") and illustrates the slightly cavalier attitude that some drivers adopt when checking for bikes.

Many drivers check their mirrors only just before manoeuvring or even after starting to move and, often, nearside door mirrors can be completely forgotten about. This means that even if a motorcyclist has their lights on, there is still a possibility that they will not be seen.

Because of this, it is important that motorbike riders always expect the unexpected so that they can stay in control.

Common situations when motorbike accidents are likely to occur

There are places on the road that are more likely to see a motorcycle collide with another vehicle than others and, therefore, are where bikers and motorists should exercise the most caution.

Other factors contributing to motorcycle accidents

There are a few other factors that are more likely to affect motorcyclists than other road users – which are, again, partly due to the lesser visibility of motorbikes and also because of the lack of physical protection offered by the motorcycle itself. These include the following:

If you are involved in a collision, you or your pillion passenger should, if possible, try to collect as much information as you can, such as details from witnesses, photographs of the accident scene, on-board camera footage, and the details of all the parties involved. Obviously, if the accident is serious and personal injury has occurred, the emergency services need to be called.

Remember that you will need certain information to assist your bike insurance claim, but the same information will also help any claim that you make for a personal injury compensation. At Thompsons, our experienced lawyers will help guide you along the way to fair recompense with honest, straightforward advice. Their years of helping bikers get justice for road accident injuries means that they have a thorough understanding of the particular issues surrounding motorcycle crashes.

Thompsons also offers a No Win No Fee Solicitors package for your added reassurance. So, if you have suffered an injury in a motorcycle accident that was caused at least partly by someone else, get in touch today for no-obligation advice by calling 0800 0891 331.