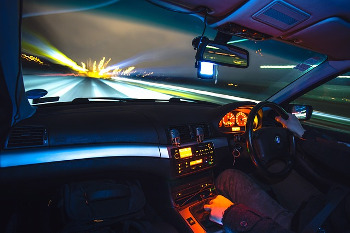 It is pretty obvious, drivers who commit driving violations - such as speeding or drink driving - crash more often. Driving violations, especially use of excessive speed, reduce safety margins and amplify the impact of driver errors.

In 2014, 282 people sustained fatal injury in car accidents caused by a driver exceeding the speed limit. In addition, 126 people died as a result of a driver travelling at inappropriate speed.

In fact, inappropriate speed is a factor in around 10% of all car accident injuries reported to the police, 13% of all incidents resulting in serious injury and 24% of all fatal car accidents.

According to a survey entitled "Driving at Work: Managing Work Related Road Safety" if average speeds were 1 mph slower, the rate of collisions would fall by 5%; thus greatly reducing the number of serious and fatal car accidents on Scotland's, and the wider UK's, roads.

Speeding, a need for attitude change

Drivers decide to speed for various reasons – they are in a hurry perhaps, they may be showing off or racing for example, or they become impatient with the driver in front and try to overtake – but speeding increases not only the risk of an accident occurring but also the severity of the accident when one does take place. It can also impact heavily on innocent parties such as pedestrians. In short, speeding is caused by a poor attitude to driving, other road users and road safety in general.

According to "Understanding Inappropriate High Speed: A Quantitative Analysis" (Road Safety Research Report 93, Stradling, DfT, 2008) there are, in relation to speed, three types of driver:

Consider you right to compensation today

If you or anyone in your family have sustained injury in a motor accident in the last three years that was not your fault, contact Thompsons no win, no fee specialists on 0800 0891331. We will advise you on your first steps to receiving the compensation that you deserve.

We are proud to be considered Scotland's leading personal injury firm.