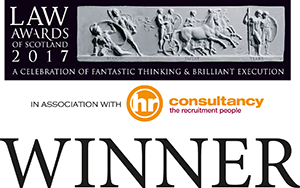 It was a fantastic night for Thompsons Solicitors at the 2017 Law Awards. After what’s been a very successful year for the whole firm seeing the hard work of our staff reflected in these awards was highly significant.

Commenting on her award Lindsay Bruce said “ I deeply honoured by this award and would like to thank everyone at Thompsons who has supported me. The work our team do supporting many clients who have suffered huge pain and...read more

It was a successful night for Thompsons Solicitors at this year’s Scottish Law Awards. The firm picked up two prestigious awards, Litigation Team of the Year and Legal Personality of the Year.

In awarding the prize for Litigation Team of the year the Judges, chaired by Hector MacQueen of the Scottish Law commission, were impressed by the work Thompsons have done in the North Sea Helicopter fatal accident Inquiry, Pleural Plaques litigation and mass litigation on a local scale helping people affected by a HIV scare at a dental practice in Ayrshire.

Commenting on the award, Thompsons Partner Wendy Durie said “This is something the whole firm can be very proud of…… read more

It was a triple win for Thompsons at the 2013 Law Awards of Scotland, with the firm taking the prestigious award of Law Firm of the Year and, for the second time in three years, the title of Employment Firm of the Year.

The award for Solicitor of the Year went to Thompsons’ Brenda Mitchell. As Senior Partner Syd Smith explained, “this is testament to the enormous commitment and enthusiasm she has shown in setting up the Cycle Law Scotland and Motorcycle Law Scotland brands. Her passion for the cause is second to none”. Read more…

Litigation Firm of the Year – The 2012 Scott and Co Legal Awards saw Thompsons add to its already bulging trophy cabinet with the title of “Litigation Firm of the Year”. The award recognised the Firm’s unique combination of no win no fee personal injury expertise and campaigning to get the best results for their clients. Partner at Thompsons and victims rights campaigner, Patrick McGuire dedicated the award to the Firm’s clients. He said: “Our clients are what make Thompsons the Firm it is, so special thanks has to go to each and every one of them.”

Specialist Lawyer of the Year – Laura Blane- Laura Blane has been at the centre of the most significant developments in civil law and the rights of asbestos sufferers in 2011/12. Her tireless work and campaigning was key to the Supreme Court’s decision to reinstate the right to compensation for pleural plaques sufferers in Scotland; a decision which has also opened up the legal system to campaign groups like never before. Blane’s legal expertise was also essential to the Damages (Scotland) Act getting on the statute book in 2011, winning new rights for the families of fatal accident victims and those with diseases like mesothelioma. She dedicated her award to the victims and families touched by asbestos-related diseases and vowed to continue campaigning for their rights.

In 2011 Thompsons made it 3 in a row by winning Firm of the Year at the Scott + Co Scottish Legal awards.  The judges praised Thompsons for their forward thinking approach and the way they engage all their staff.

Frank Maguire said “This award also recognises our total commitment to our clients.  They are at the heart of everything we do, and I thank them for putting their faith in Thompsons.  Read more Thompsons’ Win Law Firm of the Year Title.

Thompsons’ employment experts were recognised by the legal profession as Scotland’s leading employment firm at the 2011 Law Awards of Scotland sponsored by the Firm magazine.  The award was part of an historic double for the firm who also won Litigation Firm of the Year that night.   After receiving the award, head of Thompsons Employment Rights Unit, Rory McPherson, highlighted the firm’s constant commitment to do the best for its clients – “Our experts cover a whole host of areas of employment law from redundancy to equal pay.  In every case we do our utmost to get the best for our clients.”  Read more....

2011 saw Thompsons Solicitors receive another prestigious industry accolade for their expertise in personal injury law.   The Law Awards of Scotland’s Litigation Firm of the Year award was part of an historic double for the firm that night – they also won Employment Firm of the Year. The award recognised the firm’s legal expertise and its innovative approach to providing all victims of injury, from road traffic accidents and workplace injuries to industrial diseases like mesothelioma, with the best service.   They also received praise for the strong values of social justice and community engagement that run through their work.  Read more......

Thompsons Senior Partner Frank Maguire, also known as Scotland’s top campaigning lawyer was awarded Solicitor of the Year at the Firm’s Scottish Law Awards in 2010. The judges at the Law Awards ceremony recognised Frank Maguire’s professional skills in establishing Thompsons as the leading personal injury specialist firm in Scotland and praised his political convictions and his impact in changing the law.  Read more Thompsons’ Partner Wins Solicitor of the Year Title.